I recently watched a documentary on Scientology, because I wanted to understand a bit more about the dissolute life of Tom Cruise, John Travolta and Co. and also understand why someone might decide to entrust thousands or even millions or dollars to a sect that promises to put your spirit in contact with a parallel universe and whose founder was a science fiction author. (In practice I wanted to empathise with Katie Holmes who left Tom precisely because of Scientology, and who now demands a little more money from him for Suri, because $30,000  a month clearly is no longer enough. Definitively.)

I’m mentioning this documentary because I can’t forget the tale of one of these scientology members, who happened to have reached level OT 3, also known as the Wall of Fire, and was therefore worthy of being made aware of an important truth. He was told that, due to a curse by Xenu, our problems are caused by the spirits of aliens who were cast from a spaceship into a volcano millions and millions of years ago: these spirits take possession of us at birth, and we carry them with us through life in the form of disturbances and psychic issues and dramas.

The slightly appalled adept wondered if the story was an intelligence test, and when he realised they were serious and truly believed the Xenu story, he thought that perhaps it was time to get the hell out.

All this to say that, after seeing these amazing items, I asked myself the same question: is it an intelligence test, is it Xenus wardrobe or is Jeremy Scott just taking the piss? 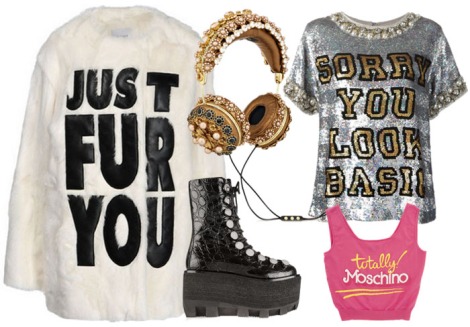 If you wanted to buy everything in the above picture it would amount to a total of €13.804 (well spent). And in detail: